It’s been a busy month! I’ve been taking a break from longer projects to work on a few short stories, but I’m itching to begin research for Cinders and Steel. (Currently accepting any recommendations for good steampunk books.)

Today, we’re talking about story ideas. Where can you find them? What do you do with story ideas once you get them? And how does your initial idea affect the writing process?  To tackle these questions, I invited my friend Amber J. Hill, blogger and writer of The Sword and Rose Chronicles, to come on the blog.

Katherine Beutner: Hi, Amber! Great to have you on the blog!

Amber J. Hill: Great to be here! Thanks for the invitation to join you.

Katherine: So, let’s talk about ideas. Some writers talk about depending on sudden bursts of inspiration, and other writers plot everything out very carefully. Where did you get the idea for the Sword and Rose Chronicles?

Amber: The Sword and Rose Chronicles originated with a basic question: What would happen if two people crossed paths in the woods? Where that question came from, I couldn’t tell you, but it was the start. From there I asked more questions, and that first book (and soon a series) was born.

Katherine: But after you had the idea, it wasn’t just a piece of cake to come up with the book.

Amber: *grins* Sure wasn’t. Some drastic things changed along the way. The main character, for example, was originally conceived as some sort of criminal on the run from the law and in need of redeeming. The redeeming bit remained, in a way, but I think Mark would be insulted by the original idea for his character now.

Katherine: I think some newer writers have the misconception that authors get story ideas in a magical type of experience where everything about the story suddenly falls into place. Although an initial story idea may be interesting by itself, it’ll need a lot of work if it’s going to become a story with a real plot.

Amber: Definitely. Maybe you remember my work on Lord Jurian from Winds of War (Book 2 in the S&R Chronicles). On that first draft, he was essentially a nice hard piece of plastic. He was stiff, two-dimensional, and very unlikeable. Then on Draft 2, his whole character developed in a tremendous way. He transformed from an annoying side character into a prominent main character, and the main plot’s ending basically rested on his choices. Now he’s one of the strongest, and I’d dare say, most relatable characters in the series. I have even more short story ideas for him than the protagonist of the series, Mark.

Katherine: So where do you usually get ideas for your stories?

Amber: *laughs* You ask hard questions. One source is my dad. I call him my “plot master consultant.” I go to him whenever I’m stuck, or just want to bounce something off him. Often, he furnishes me with a good idea based on his knowledge of the story and the characters. Another possible source is music. I’ll be listening to a song that has lyrics I really like or the mood of which matches up to the story, and I’ll link it to a particular character or scene. Then my mind starts whirling with ideas. It’s like an aid to my imagination. That said, more often than not, I don’t know where ideas spring from. I know what I want to achieve, but as to where the ideas that get me there originate… *shrug* What about you?

Katherine: I get a lot of ideas from overanalyzing what I like and don’t like about other books and movies. Also, whatever topics I’m learning about in class or at work lead to story ideas. Years ago, I started a document for all my random ideas, since I have a tendency to accidentally come up with ideas for epic fantasy trilogies over lunch… while I’m supposed to be finishing the other five projects I’ve already started. The good thing is, I rarely run out of ideas. The bad news is, I have way too many stories to write. So I have to prioritize which ones to work on.

Amber: And how do you know when an idea is a good one?

Katherine: I usually start developing an idea because there’s some element to it that excites or touches me in some way. Often, that’s because I see an element of conflict inherent in the initial premise. First, I like to try writing a little of the story to see if things are clicking together. Then it’s usually best if I start plotting, to see whether the story will make sense after I start to explore the logical consequences of the initial idea.

Amber: I was what they call a “discovery writer” or “pantster” starting out. I plotted a bit, but nowhere near to the extent that I do now. It’s like your random ideas for characters, scenes, etc., are a bunch of dots scattered on a graph and you need to figure out how to connect them together. The discovery writer works it out as they go along (and then sometimes gets stuck because they didn’t think through things thoroughly). The plotter tries to connect it all/mostly together at the start, figuring out the story beginning to end. Still, no matter which style you favor, things inevitably change along the way.

Katherine: Another thing about story ideas: you don’t have to write every single idea that pops into your head. Sometimes I have to concede that I just don’t have time to write a certain story, or that I’m ready to write it yet. There’s an epic fantasy series, Wintergold, that I want to write some day. However, I’m not ready to work on a story of that scale, so I’ve set it aside for now. (Fun fact: I got the idea for Wintergold when we studied ancient Crete and Greece in my art history class. I started thinking, “Hey, an epic fantasy novel set on an archipelago would be really cool.”)

Amber: Definitely. I certainly feel that way about some future books I have planned. I have ideas for them and certain scenes already conceived, but I feel like I need to experience more of life (good and bad) in order to really do justice to these ideas. Side note: This is one reason I like writing the Sword and Rose Chronicles; I get to enjoy growing and maturing right alongside the younger characters in my cast. I don’t have to stretch my mind backward through time, trying to recall how a 22-year-old thinks. I know.

Katherine: Well, we’ll call that a wrap for today. Thanks, Amber, for coming on the blog! Readers, you can check out Amber’s blog at amberjhill.com for more about her books and free short stories.

Thanks for reading! I hope you got some ideas about getting ideas. 🙂 Comment below about ways you come up with ideas, and whether you keep a notebook by your bed… or tend to get up at 1 a.m. to hunt for paper and a flashlight in the dark when inspiration strikes. 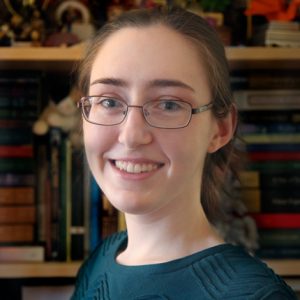